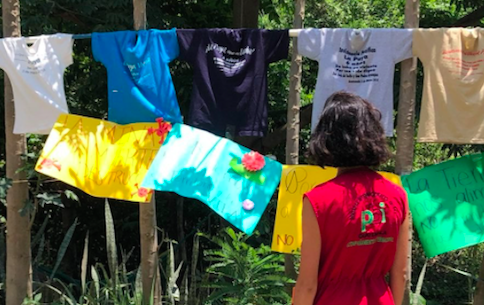 On May 21, PBI-Guatemala posted: “PBI accompanies the Peaceful Resistance of La Puya in the symbolic act of handing over machinery to the mining company caused by a judicial decision. However, the license continues to be suspended.”

In March 2012 residents from San José del Golfo and San Pedro Ayampuc – an area known as La Puya, just north of Guatemala City – set up a 24-hour a day blockade at the entrance of the Vancouver-based Radius Gold Inc. El Tambor mine.

By August 2012, the Canadian company sold El Tambor to US-based Kappes, Cassiday & Associates, but retained an economic interest in the mine (including quarterly royalty payments on the gold production from the mine).

On May 23, 2014, after two years of peaceful struggle, the communities in resistance to the mine were violently evicted by the police.

By February 2016, the Peaceful Resistance of La Puya won a Guatemalan Supreme Court ruling that provisionally suspended the mining licence because there had not been prior consultation with affected communities, as is required under Guatemalan and international law, in particular the International Labour Organization’s Convention 169.

Even after the eviction in 2014 and the court ruling in 2016, members of La Puya continued a 24-hour presence in opposition to the mine.

What has just happened?

Prensa Comunitaria explains: “[On May 21] the immobilization, which had been legally imposed [by the Supreme Court] in 2016, [was] officially lifted. Although, this does not mean that the miner can restart operating activities.”

It also notes: “At a hearing on March 25, 2021, in the 4th Court, the judge resolved an incident raised by the mining company, on the lifting of the immobilization of the Progreso VII Derivada [El Tambor] project.”

Prensa Libre explains (in an article about the start of a preparatory process for a consultation with the community on the El Escobal mine): “Regarding the Progreso VII Derivada [El Tambor] mine, they have not yet received the execution, so the preparatory process cannot begin. This ruling is not yet final because the Constitutional Court must resolve extensions that the parties presented, the Ministry of Energy and Mines (MEM) added.”

Prensa Comunitaria notes: “[The Peaceful Resistance] reaffirms its commitment to peaceful struggle for the defense of life and natural goods and territory.”

“Faced with this situation, they call on the population, to be vigilant in the face of any action by the mining company, which may give evidence of continued exploitation, since the operating licence remains suspended.”

The full statement by the Peaceful Resistance has been translated into English by the Guatemala Solidarity Network and can be read here.

The Peace Brigades International-Guatemala Project has accompanied the Peaceful Resistance of La Puya since November 2012.