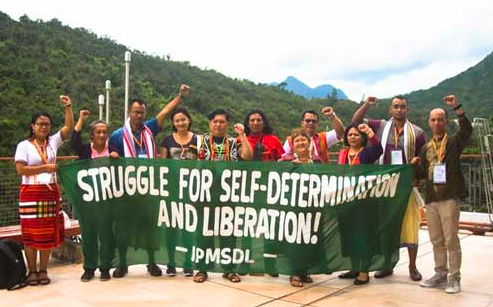 Indigenous Peoples, advocates and members of IPMSDL call for continuing struggle for self-determination to combat  imperialist plunder and state-terror. Credit: Carlo Manalansan, International Indigenous Peoples Movement for Self-Determination and Liberation (IPMSDL) Rights are earned through hard-fought struggles. And for Indigenous Peoples (IP), its fulfillment comes from the collective and continuous defense of ancestral land and territory, and assertion of their ways of life and the right to self-determination. As the pandemic ravages and the global crisis deepen, the world’s superpowers and the oppressive governments and systems continue to intensify widening inequality. Exacerbated neglect and discrimination to their access to health and basic services has been a grave threat to the 476 million Indigenous Peoples across the globe — the tip of the iceberg of today’s social and economic inequities.

For those already faced with food insecurity due to loss of ancestral lands, access to food and livelihood became everyday challenges. And while the mobility of indigenous villages are limited, there are no breaks for extractives, logging, government and private projects, and militarization in indigenous territories.

Wealth outpours to secure corporate profit at the expense of indigenous rights to land and environment protection. Imperialist plunder dominates over people’s health and lives.

The railroading of public hearings for the Teesta dam, a China-funded hydropower project approximately worth $1 billion, poses threats to the earthquake-prone environment and customary rights of Lepcha people in Sikkim, North East India.

The $ 700 million Papar Dam in Sabah, Malaysia remains a threat to indigenous communities of Papar and Penampang. In the Philippines, contractors of the $ 250 million China-funded Kaliwa Dam resume operations despite the lockdown.

Mining in ancestral lands is now the key economic driver in Amazonian countries as the price of gold rises in time of the pandemic. An estimate of 1.5 million Indigenous Peoples depending on Amazon forest faces the attacks of criminal groups and illegal miners.

The oil spill in Coca and Napo river in Ecuador affecting 200,000 Kichwa and Shuar people remains. In India’s Assam and Manipur, permits for coal and mineral mining and exploration in wildlife centers and IP lands are hastened in the name of “seamless economic growth.”

Five-star Marriott Hotels and Resort is on its way to displace around 11,000 Juma cultivators and six villages of indigenous Mro Community in Chittagong Hill Crest, Bangladesh. Arguing the Kenyan government’s forest conservation programs, the Kenya Forest Services has demolished over 300 Ogiek homes in Mau Forest and burned 28 homes in Embobut Forest.

In countries with most aggressive projects encroaching ancestral lands, fear and terror has been the weapon of the State’s laws and armed forces to silence all resistance.

Around 40% of land defenders killed around the world belong to indigenous communities even though they make up only 5% of the world’s population. And with fascists and autocrats spewing racism, IP’s are in greater danger.

The call grows to pull out heavy military deployment in indigenous lands, which resulted in a wide array of human rights violations. Militarization not only enables plunder and land encroachments, it erodes all safeguards to protect the collective rights and rights to self-determination and governance.

In Karen territory in Burma, 1,500 villagers mobilized after Burmese soldiers killed and robbed an indigenous Karen woman in July. Another murder of West Papuan in palm oil plantation by the Indonesian military this May added to at least 100,000 West Papuans who have been killed since the Indonesian takeover in the 1960s. Militarization in Lumad communities in the Philippines aggravated forced evacuation and closure of indigenous Lumada schools.

In Indonesia, indigenous farmers Dilik Bin Asap and land rights activist James Watt are now jailed for harvesting fruits from a plantation company that has encroached on their lands.

Charges of illegal possession of firearms have been an old trick by the police as happened to Betty Belen, indigenous leader who led a barricade against the entry of Chevron Energy company’s geothermal power project in her village.

The United Nations identified criminalization and repressive counter-insurgency laws as a tool against IP defending and exercising rights to their lands. Indigenous leaders and members of Cordillera Peoples Alliance (CPA) have hit on the systematic and fully-funded State-terror to smash any dissent and resistance using online and public vilification, terrorist-tagging and harassment.

Together with massive disinformation and fake news, all these fuels ethnic divide and discrimination towards IP and their struggles.

In the commemoration of the annual International Human Rights Day, the painful state of Indigenous Peoples brought about by imperialist powers with tyrants and militarized governments benefitting from plunder, need to be challenged.

Let us build our movement for international solidarity to defend IP lands and life from imperialist plunder and State-terror. To honor our brave ancestors who paved the way, and to build a better future for the next generation, let us unite to reclaim our rights!