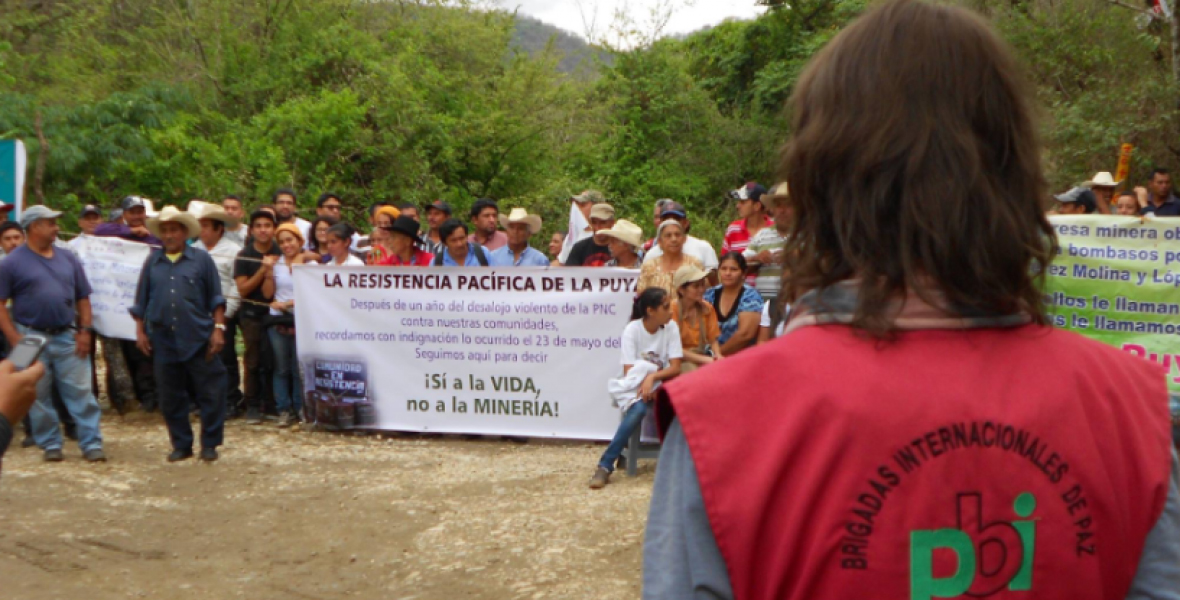 Residents from the communities of San José del Golfo and San Pedro Ayampuc -- an area known as La Puya -- have been fighting against the Progreso VII Derivada-El Tambor gold mine located just north of Guatemala City since March 2010.

The Peaceful Resistance of La Puya, which is made up of members from these communities, has stated, "[The environmental impact assessment] shows that the gold and silver are contained in arsenopyrite rock, which contains high levels of arsenic. Levels of arsenic in the water increased considerably during the time the mine was in operation."

They have also expressed concern about the massive amount of water the mine would use in their water-scarce region.

Their struggle to defend water has seen a blockade of the mine site, repression and criminalization, a win at the Guatemalan Supreme Court, and now a challenge at the Washington, D.C.–based World Bank Group's International Centre for Settlement of Investment Disputes.

A timeline may be the clearest way to convey the narrative of this struggle:

2010 -- Exploraciones Mineras de Guatemala S.A (Exmingua) presents its environmental impact assessment for the proposed mine to the Guatemalan government.

March 2, 2012 -- Hundreds of community members set up the La Puya encampment, a peaceful blockade at the site of the mine.

June 2012 -- An assassination attempt is made on resistance leader Yolanda Oquelí by unknown assailants on her way home from the roadblock.

That said, the Network in Solidarity with the People of Guatemala (NISGUA) has noted, "The company's 2013 audited financial statements state that three quarters of the cost of the sale transaction will be paid to Radius once gold shipments commence from the property and that Radius also anticipates quarterly payments from KCA based on gold production."

May 22, 2014 -- Hydrogeology expert Robert Moran states that the company's environmental impact assessment on the mine was the worst he had seen in 42 years of experience.

May 23, 2014 -- Hundreds of police used tear gas and flash bombs to remove the women who formed the front line of the resistance at the blockade.

PBI-Guatemala Project has noted, "PBI observed a disproportionate use of force by the police during that eviction."

May 2014 -- Nine leaders of the resistance are accused of making threats and assaulting employees at the mine. They were cleared of those charges in March 2015.

July 1, 2014 -- Two PBI-Guatemala Project field volunteers who had witnessed the police action are told by Guatemalan officials that they have to leave the country within 10 days.

May 26, 2015 -- Two hundred riot police use excessive force to remove members of the resistance when they block vehicles from entering the mine to mark the one-year anniversary of their eviction and a lack of response to their request for a dialogue.

February 2016 -- The Guatemalan Supreme Court rules to provisionally suspend the mining licence due to lack of prior consultation. Operations at the mine are suspended.

May 2018 -- KCA submits its notice of intent to file arbitration under the Free Trade Agreement between the Dominican Republic, Central America and the United States (DR-CAFTA). The company cites the community protests and unjust treatment by the state.

December 11, 2018 -- KCA files a $300 million claim with the International Centre for Settlement of Investment Disputes, a World Bank arbitration mechanism.

February 1, 2019 -- Ten organizations, including the Maritimes-Guatemala Breaking the Silence Network, the Mining Injustice Solidarity Network (MISN) and MiningWatch Canada, release a statement in solidarity with the resistance and in opposition to the investment challenge.

This community struggle continues and international solidarity remains an essential component in their fight to fully realize their right to water and respect for community consultation and consent as pre-conditions for investment, as well as the broader campaign against the corporate-friendly investor-rights provisions in "free trade" agreements.

Brent Patterson is a political activist and writer.