While the future of metal mining in El Salvador is being debated by a panel of expert arbitrators who will determine whether El Salvador violated its investment law for not issuing a mineral exploitation permit to Pacific Rim Mining corporation, hundreds of thousands of people in El Salvador and around the globe took actions to denounce the close door proceedings and to demand that the company, now owned by Australian/Canadian OceanaGold, withdraw its law suit.

The panel of arbitrators, part of the World Bank's International Centre for the Settlement of Investment Disputes-ICSID, is considering a decision merely on trade merits, but opponents of metal mining in El Salvador, and their international allies, maintain that there is much more at stake: the violation of human rights; the long term environmental and economic sustainability of a nation; and the sovereign right of a democratically elected government to legislate policy to protect the public good.

Actions of protest involving public forums, cultural events, a letter signing campaign, and a demonstration in front the offices of the World Bank in San Salvador where held by member organizations of the National Roundtable Against Metallic Mining in El Salvador-La Mesa, who mobilized tens of thousands of people to raise the profile of the Pacific Rim/OceanaGold case and to demand that the Legislative Assembly to enact legislation to ensure permanent prohibition of metal mining in the country.

Internationally, support for the demands of La Mesa was promoted by the international allies against mining in El Salvador who called for an International Month of Solidarity to back El Salvador’s right to autonomy and self-determination.

And the world responded.(Click here for a report on extensive media coverage of international actions)

“Australia should stop funding the World Bank if it won’t cut ties to ICSID,” said Paddy Crumlin, National Secretary of the Maritime Union of Australia in a press release posted on the union’s website.

A letter delivered to Australian High Commission in Ottawa by a delegation organized by MiningWatch and Salvaide also asked the Australian Government to intervene on behalf of El Salvador’s right to make democratic decisions.

“We hope that you will share our astonishment that OceanaGold has vowed to continue pursuing its claim against the people of El Salvador and to use the ICSID to subvert democratic decision‐making over mining and environmental health in El Salvador,” the letter stated. 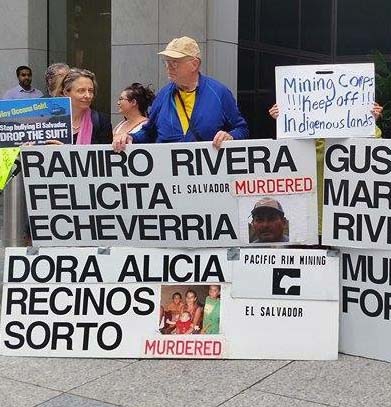 Also in Canada, the council of Canadians along with the Latin American Solidarity Network and The mining injustice solidarity network held a demonstration in Toronto’s financial district, home to OceanaGold’s offices in Canada.  The demonstration featured participants from dozens of organizations from around the world that had gathered in Toronto for a planning session organized the Blue Planet project and personalities such as Xenia Marroquin from El Salvador’s Foro del Agua and Maude Barlow, National Chairperson of the Council of Canadians.

“Your claim is a direct assault on democracy and justice” stated a letter addressed to Jim Askew, chairman of OceanaGold, signed by over 35 organizations.  “The legal costs and a potentially negative outcome of the suit could deteriorate the government’s already taxed capacity to prevent further migrations, curb the chronic insecurity in the country, and implement policies for sustainable economic growth."

In Washington hundreds of supporters gathered in front of the offices of the World Bank in a high profile media event to demand that the WB reviews the role of ICSID in detriment of the social and economic development of nations in the global south.  The demonstration was organized IPS, CIEL, OXFAM and was supported by as many as 18 unions, faith groups and Salvadoran community organizations in the US.

“This case (OceanaGold Vs. El Salvador) exemplifies what is wrong with investor-state dispute settlement mechanisms in trade agreements…  Let’s put an end to these egregious/capricious lawsuits that are increasingly biased in favor of corporate investors and against public interest.” Read a call to action posted on the IPS website for the Washington, DC rally.

Support came from as far as the Philippines where social movements struggle against the negative impacts of OceanaGold’s trail of human rights violations in its Didipio mine in Nueva Viscaya.

“Communities and movements campaigning against large-scale mining in the Philippines stand in solidarity with the people of El Salvador in their continuing fight against Oceana Gold/Pacific Rim and their struggle for a better life for all” read a statement by the Alyansa Tigil Mina (Alliance against Mining-Philippines), Lilak (Purple Action for Indigenous Women’s Rights), Focus on the Global South and the EU-ASEAN FTA Campaign Network in support on the anti mining movement of El Salvador.

Final arguments in the case of Pacific Rim Vs El Salvador were laid out in Washington on September 22 and the ICSID panel has an indefinite time to issue a ruling. El Salvador’s defence team, however, speculate that it could take up to six months.

But, the campaign against the company in El Salvador is far from over, an international online petition has already garnered over 170.000 signatures and organizers are poised to reach 200.000 before it is delivered to OceanaGold. Meanwhile, activists in the national and international movement against mining in El Salvador are preparing for continued actions until OceanaGold is defeated and a permanent ban on mining is achieved in El Salvador.

As the world awaits a final decision on OceanaGold, communities in El Salvador are not taking any chances. Just one day

before both the Salvadorean state and OceanaGold's legal teams laid out their final arguments at the ICSID, the municipality of San Jose Las Flores, in the department of Chalatenango, voted overwhelmingly to ban mining in their territory.

“We are concerned that the national government and the legislative assembly have failed to take effective measures the ensure the long term health of our communities and the sustainability of our environment, that is why we are starting to work with local governments to help them exercise their constitutional mandate to enhance democratic decision making mechanisms on issues of local concern” explained Marcos Galvez president of CRIPDES and a member of La Mesa.

His statement manifests a sense of restlessness currently felt in communities affected by mining projects. After six years of progressive governments that have implemented a de facto moratorium on mining but are reluctant to deliver a definite mining prohibition, anti mining leaders see the ICSID hearing as a reminder of the latent threat that mining projects represent in their territories.

And, the realization that the national government may have its hands tied with previous commitments to trade agreements, has compelled communities in El Salvador to re-think their organizing strategy and to utilize already existing legislation, such as the municipal code, to defend their territories from the bottom up.