Communities and organizations gathered in front of the World Bank in San Salvador to demand a fair verdict on the lawsuit of Pacific Rim vs El Salvador. 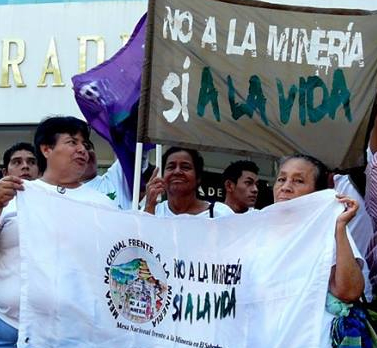 After days of uninterrupted rain, on Thursday October 22nd the sun came back to shine on hundreds of community members and organizations as they gathered for a protest in front of the World Trade Center in the elite Colonia Escalòn of San Salvador, where the office of the World Bank are located.

The protest was organized by La Mesa Nacional Frente a la Minería Metálica de El Salvador, an umbrella organization that groups different associations, NGOs, religious and academic groups with the common objective of achieving the prohibition of metallic mining in El Salvador.

The decision to hold the event in front of the World Bank is based on the fact this multilateral institution plays a key role in the Salvadoran struggle against mining: the ICSID (International Centre for Settlement of Investment Disputes), an agency of the World Bank, adjudicated a lawsuit filed by mining company Pacific Rim (now owned by OceanaGold) against the government of El Salvador after it was refused an exploitation permit.

Australian/Canadian OceanaGold sued the Central American country for $301 million dollars, the sum amounts to half of the national education budget for a year. The final hearings on the case took place in September 2014, however to this date a final verdict has not been issued.

Antonia Recinos from the Association for the Economic and Social Development, ADES said that the protesters gathered to have their voice heard and to deliver to the World Bank offices a document with their main demand, “a verdict that favors the communities, not multinational enterprises”.

Eduardo Mira from CEICOM (Research Centre on Investment and Trade) highlighted the paradox of this situation in which a wealthy company is demanding a considerable amount of money from a country that is lacking resources for its own people; the most critical example is the scarcity of clean water sources in the nation. Among the various detrimental effects on the environment that the mining activities would have, there is also the further worsening of the pollution of waters.

This protest is only the last step taken by affected communities to protect their scarce natural resources from being exploited and contaminated by noxious gold mining activities.

As the government has failed in passing legislation that prohibits mining, over the last years communities have organized to fight multinational mining companies through a more institutionalized mechanisms: public referenda. These are meant to determine whether local inhabitants agree or not with the exploration and exploitation of their territory, followed by the introduction Municipal ordinances banning mining if the referenda are successful.

So far all the referenda, held in San José las Flores, San Isidro Labrador, and Nueva Trinidad, have had overwhelming support for the mining prohibition at the local level. Another referendum is scheduled to take place in Arcatao, in the Department of Chalatenango, on Sunday November 8th, 2015.

With the support of many organizations, CRIPDES, CORDES, and CCR, these communities will get the chance to decide on matters that directly affect their own territory for the sake of future generations.