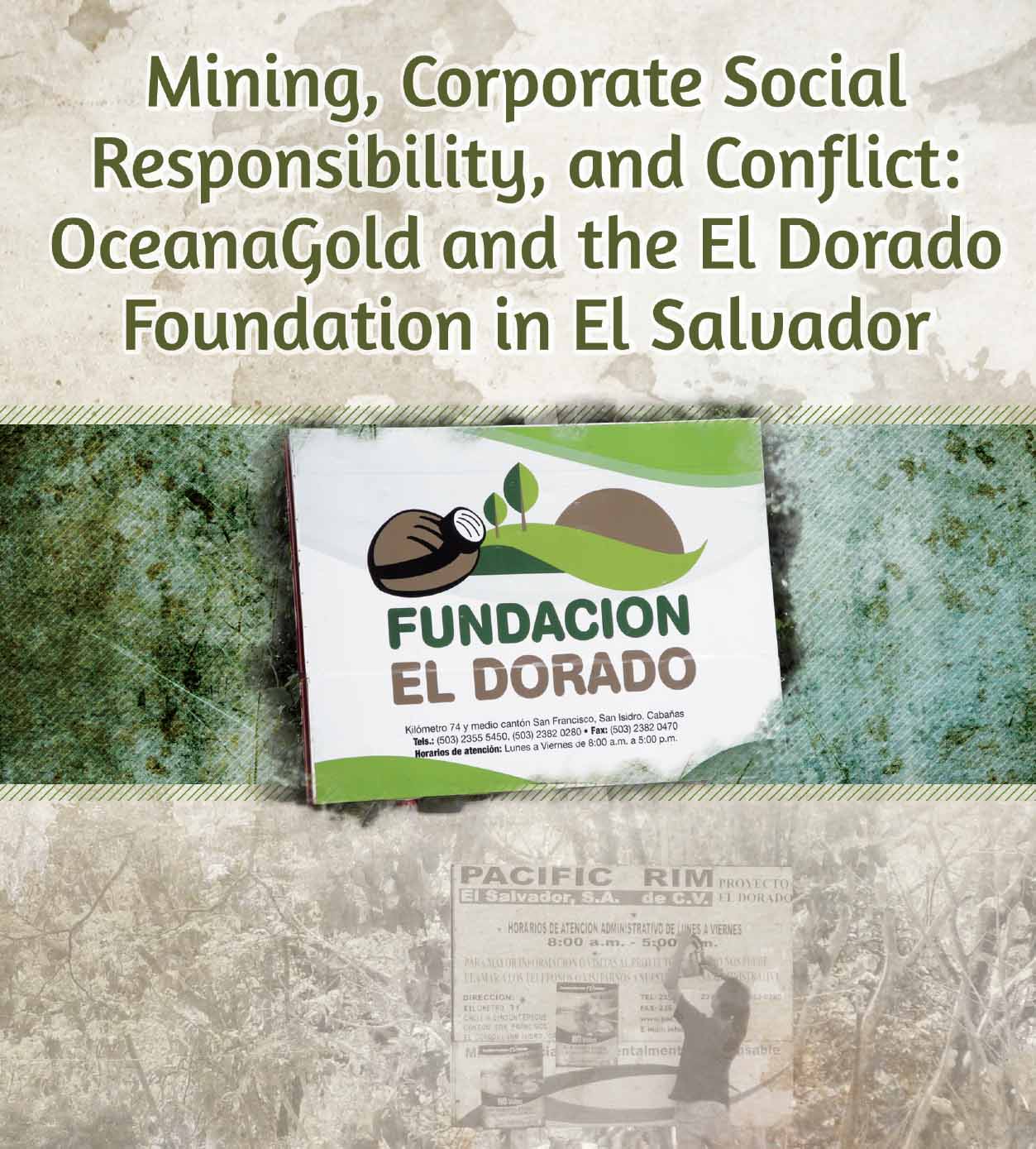 (Ottawa/Washington/Melbourne)  A new study finds that OceanaGold’s attempt to rebrand its proposed gold mine in El Salvador through the use of a company-sponsored foundation at the local level is deceitful, disrespectful and dangerous.

Mining, Corporate Social Responsiblity, and Conflict: OceanaGold and the El Dorado Foundation in El Salvador, published by the Institute for Policy Studies and MiningWatch Canada, will be presented at OceanaGold’s office in Melbourne on Thursday, the 36th anniversary of the murder of Salvadoran Archbishop Óscar Romero.

“Designed to whitewash the company’s image and undermine opposition to a proposed gold mine in Cabañas, the activities of the El Dorado Foundation contradict the country’s decision not to permit metal mining and risk reawakening a conflict that has already cost several people their lives,” remarks Professor Stuart Kirsch, one of the authors and an anthropologist at the University of Michigan with two decades of experience studying mining conflicts.

Canadian-Australian mining company OceanaGold is suing El Salvador for US$250 million at a World Bank tribunal when the company failed to obtain a mining permit for which it never met regulatory requirements. Three successive Salvadoran presidents have committed not to issue new mining permits, while a 2015 opinion poll found that opposition to metal mining is nearly 79.5% nationwide and 83.9% in municipalities affected by the proposed project.

Between 2009 and 2011, four local environmental activists were murdered in Cabañas. Since then, several local organizations have also received threats These crimes have never been fully investigated.

“At the same time that the El Dorado Foundation’s activities could raise the stakes and stir up tensions again locally, they gloss over the negative impacts from mining that Salvadorans worry could damage vital water supplies. The Foundation’s propaganda paints a positive picture of OceanaGold’s Didipio mine in the Philippines where two activists have also been killed and there have been serious complaints over environmental and social harms,” remarks Jen Moore, Latin America Program Coordinator for MiningWatch Canada and co-author of the report.

“OceanaGold claims it is committed to improving conditions in local communities, but this is absurd when the company is suing El Salvador for hundreds of millions of dollars in a process designed to coerce the government into giving it a mine permit. If it would only withdraw its suit, millions of dollars in legal costs would be freed up that could be put to productive use in Cabañas and El Salvador,” states Manuel Pérez Rocha, a fellow with the Institute for Policy Studies.

OceanaGold is suing El Salvador on the basis of provisions commonly found in international investment agreements, such as the proposed Trans Pacific Partnership (TPP), the Transatlantic Trade and Investment Partnership (TTIP), the Comprehensive Economic and Trade Agreement (CETA) and others. International arbitration cases have a chilling effect on the efforts of governments to enact measures to protect the environment and public health, including proposals in El Salvador to legally ban metal mining.

The report calls for the closure of the Foundation given broad opposition to mining in Cabañas and El Salvador, the manipulative practices of the Foundation is operating, as well as the potential to reignite violent conflict in the area.

The report was presented in public forums in Cabañas and San Salvador in early March. Father Bob Maguire will present the report at OceanaGold’s head office, 357 Collins Street in Melbourne, Australia, at 11:30am AEDT on Thursday March 24th.