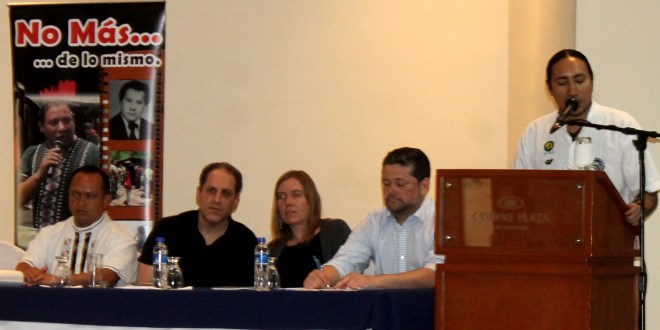 "The activities of the El Dorado Foundation are misleading, are dangerous and show a lack of deep respect for the people of Cabañas and El Salvador," said Jennifer Moore, Coordinator of the Latin America Program Mining Watch Canada, while presenting a joint research document with the National Roundtable against Mining.

The document entitled "Mining, corporate social responsibility and conflict: Oceana Gold and the El Dorado Foundation in El Salvador", establishes that the actions of the foundation have the same objectives of Pacific Rim Mining and its successor OceanaGold which seek to develop a mining project that is controversial due the population density and pollution it would generate.

Moore said the company (Oceana Gold) utilizes "misleading" propaganda and information on mining that is one sided and incomplete in relation to the impacts of this kind of polluting industry as they try to win supporters with social projects they carry out with the local population.

"These alleged charity programs are clearly to advance and raise the reputation of the company and try to open the door for mining; that is what we found in the discourse of El Dorado Foundation of Oceana Gold when they discuss their activities ... they describe it as a way to build the road to mining in Cabañas ... and in El Salvador, " she said.

The research team reviewed company reports, which were obtained from government institutions, as well as interviews with residents of San Isidro; members of the National Roundtable against Mining, and local government officials during two visits made in February and August 2015.

"This, beyond the statutes of the El Dorado Foundation in fostering economic and social development of the surrounding communities, is misleading; and beyond the computer, English classes and programs for women entrepreneurs are false promises of future employment which are overstated... in interviews we made to the population, we found they have made employment offers conditional to a positive ruling by the Tribunal in Washington (ICSID), this is false, because the court does not have the power to change the mining policy of the government of El Salvador " she reiterated.

Meanwhile, Vidalina Morales of the National Roundtable Against Mining, said that the research confirms the doubts and suspicions about the actions of the El Dorado Gold Oceana Foundation.

"There are more than enough arguments (research) to set a precedent in the country and is our demand to the Legislative Assembly and the government itself take measures to protect the population. And with this research is clear that when they establish themselves in communities to develop their projects, they lie, cheat and also manipulate the political apparatus of the area, and I mean mayors and municipal councils such as San Isidro and Sensuntepeque, which in the past and present are subservient to this transnational company" she claimed.

The research establishes that the El Dorado Foundation is the "public face" of Oceana Gold, making donations to schools, clinics and other activities, but the operations of this entity also have the potential to exacerbate conflicts among the same population.

"We believe this research reveals all the constant complaints that those of us who live in the territory have been making in regards to Pacific Rim, now with its new name of Oceana Gold… that all they do is extort El Salvador with a law suit that has taken seven years without resolution at the ICSID, while the life of our population depends on a country without mining" she said.