Despite of a two year mining prohibition, the ghost of mining does not fade away for communities in El Salvador that are exposed to crossborder contamination that may cause irreversible environmental damage to their limited water resources.

ASUNCIÓN MITA, Guatemala. Although everything indicates that Canadian Bluestone Resources consortium has oiled up its powerful technical and financial machinery to restart operations at the Cerro Blanco mine, there is still a veil of secrecy and silence in the surrounding communities located near the megaproject.

Worker guards the entrance of the Cerro Blanco mine in Asuncion Mita, Guatemala. Photo: Karla Rodas"We have heard rumors, there are three people linked to the mine who come to the community, but they  say no, they are lies (the rumors about restarting of operations), they say the mine is going to close, and it is currently under maintenance" , explained Viviana Palma, a young teacher, resident of the village of Trapiche Vargas, jurisdiction of Asunción Mita, in the eastern department of Jutiapa, Guatemala.

The Cerro Blanco mine is located in the vicinity of Asunción Mita, a city of about 50,000 inhabitants, located 160 km southeast of the Guatemalan capital, and about 10 kilometers from the border with El Salvador.

This closeness with El Salvador led environmental groups from both countries to oppose the project since it was established in the area, in 2005, due to the possible negative impacts that would occur not only in Guatemalan towns, but also in El Salvador, as contamination reaches the Guija lake, in the department of Metapan, El Salvador.

And from there the remnants of the process, heavy metals and other pollutants, would reach the Lempa River, which sig sags throughout the country and is the main source of water for 60% of the population of Greater San Salvador.

The veil of silence.

"The rumors come through information from the local parish.  A Canadian sister warned us that it has become known that the stubborn mining company wants to continue drilling and everything they do" added Palma, 27 years old.

She was a participant, in a February 22, meeting between inhabitants of towns neighboring the mine, in the parish of Our Lady of the Assumption, in Asunción Mita. The objective of the meeting was to analyze the situation after executives of the mining consortium refused to provide access to the facilities of the mine to a binational commission composed of representatives of the Offices for the Defense of Human Rights of El Salvador and Guatemala, who had asked for permission to verify the activities of the mine.

Mining activities started in 2005 by a local company, Entre Mares, a subsidiary of Canada's Goldcorp. But public pressure and unforeseen technical problems led the company to suspend the project in 2013.

That's how the project became stagnant.

But in January 2017, international news reported that Bluestone Resources acquired the deposit rights for $18 million dollars. The agreement also stipulated that the company would pay Goldcorp another $15 million during the first six months of production.

In addition, on March 1, 2019, Bluestone announced an agreement with Cormark Securities Inc., an international financial consortium, to inject capital for $16 million dollars, precisely to enhance its activities in Cerro Blanco, after announcing the laboratory results of a drilling program in the areas adjacent to the mining concession.

Although that information is already public, both the agreement between Goldcorp and Bluestone, and between Bluestone and Cormark Securities Inc., especially in financial news reports, little has been said in Guatemala, said Julio González, activist of the local Madre Selva Environmental Collective.

"The Guatemalan press has given very little follow-up to such a vital issue for a lot of people in the area," González explained.

He even said that as a group they have sought answers from legislators, especially on whether Bluestone should request all permits to operate, including the preparation of a new Environmental Impact Study (EIA), after having acquired the rights from Goldcorp.

"We asked some parliamentarians the same question, but they said they were not aware and/or feigned dementia," Gonzalez said.

He added that officials from the Ministries of Environment and Energy and Mines have shown contradictory positions, because although the former said that Bluestone should submit a new EIA, the latter assured that they only granted the licenses, and that they respected private sales agreements or transfer of rights from one company to another.

Madre Selva´s activist said that the company would have to present a new EIA, as the one originally presented by Entre Mares/Goldcorp suffered from many technical deficiencies and was approved "in an illegal manner, because it was first rejected twice by the ministry´s technical team, then the company resorted to corruption and pressured the Minister of Environment to remove the technical team that had rejected that study. They succeeded, the team was replaced, and the new team approved the same study".

Environmentalists charge that since 2013, workers of the mine have been pumping boiling sulphured, thermal waters into the Ostua river wich leads into the binationally shared Guija Lake. Photo: Karla Rodas

Despite the technical deficiencies and alleged fraudulent ways in which exploration permits were obtained, a spokesperson for Bluestone Resources confirmed at a conference of the Prospectors and Developers Association of Canada, on March 3rd, 2019, that the company is utilizing the same questionable permits obtained by Guatemalan subsidiary Entre Mares, as the main sales card to attract investors.

An attempt was made to obtain a response from the authorities of the Ministry of the Environment of Guatemala, on that subject, but there was no answer.

"We live under uncertainty."

If it is difficult for activists of Madre Selva to obtain official information, the situation is even worse for the residents of the communities located around the mining site.

Even information that is already official, disclosed in international media, such as Bluestone's acquisition of Goldcorp's rights, in the communities close to the project, is still handled as a rumor.

"There are suspicions that it is not the same company that started the project, it is a different one, but people are not well informed, there are colleagues who say that another company wants to buy (the mine), but it is not officially confirmed," said Noé Alarcón , from the community of Las Ánimas, also near the site.

Alarcón believes that the activities are about to restart because "suddenly (the employees) have been more active, that means that they are in the process of being acquired (the company), or it has already happened.

He regretted that the company is not willing to tell the locals, face to face, what the current situation of the mine is.

"It's disappointing that the company does not say it directly, but we have learned from people who work there and leak information. We live under great uncertainty," he said.

The residents of the neighboring communities of Asunción Mita, that gathered at the meeting at the local parish, affirmed that for them the best thing is for the Canadian consortium to go back where it came from.

"What we want is for the mine to leave the community, because of the health problems we already noticed," said one participant, who preferred not to identify herself for fear of retaliation against those who oppose the mine.

These health problems would have their origin in the contamination of water sources, because, although the company is not yet extracting precious metals, it is removing thermal waters from the tunnels, with high arsenic contents.

"They do not care about anything that happens in our villages, they are only interested in taking the gold and silver and to have more millions (of dollars) than they already have," he said.

The price of gold has varied significantly in the last decade, and went from $ 600 in 2006 to $1,250 in 2016, according to the report Strategies for the Defense of the Environment and Human Rights against the Impacts of Mining Extraction in Central America, published last February by the Central American Alliance against Mining (ACAFREMIN).

However, despite the high expectations, the company (Goldcorp) announced a "temporary suspension" in 2013 due to thermal waters that caused flooding in the tunnels. 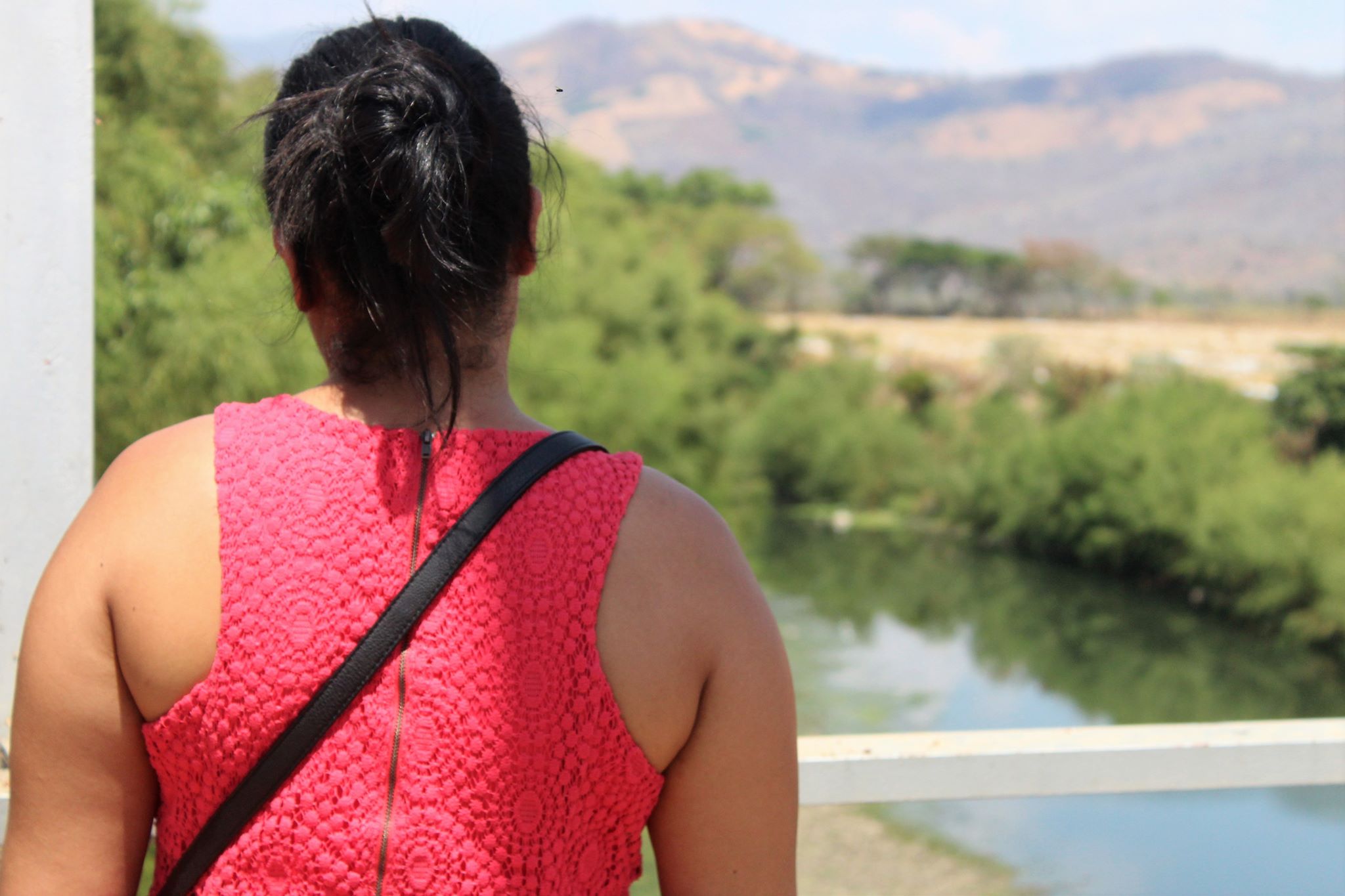 A residente from Asuncion Mita looks at the Ostua River, where thermal waters of the mine are dumped. Photo: Karla Rodas

For a few dollars more

Abel Antonio Díaz is a 52-year-old Xinca indigenous man, he has lives 23 years in Cerro Blanco, a community of about 700 people, where the main gold and silver deposits are located.

According to his calculations, 40% of that population is Xinca, an ethnic group not connected to the Mayan tree predominant in the country.

Nationally, more than 60% of the Guatemalan population is of indigenous origin.

He recalled how the company arrived for the first time and how from the beginning the company turned to the well-known strategy of offering "development" projects not only in Cerro Blanco but also in other neighboring towns.

They financed the construction of schools or health units, as well as paving roads, among other works. With this strategy, the company won over the residents of Cerro Blanco, in addition to offering jobs.

Díaz says he is probably the only person in Cerro Blanco who has remained against the mining company's operations, even though he has been threatened several times.

"In 2010, there were death threats, and I was told there was a list of three people who were going to disappear, and I was told: Abelito, be careful, because you already are already in their sights, they will make you disappear at any moment", he said.

The fight against mining has generated, in effect, persecution and violence against activists, not only in Guatemala, but in the Central American region and other parts of the world where that industry has arrived.

Guatemala reported 22 environmental and land defenders killed between 2006 and 2014; El Salvador, four; Nicaragua, three, and Honduras suffered the worst part, with 119, according to the study of ACAFREMIN cited above.