The National Roundtable against Metal Mining issued the following response to the announcement of OceanaGold's purchase this week:

On October 8, transnational mining company OceanaGold announced the acquisition of the shares and properties in El Salvador belonging to Pacific Rim Mining. With a value of $10,2 million USD, a company press release announced its intention to seek a negotiated solution to the impasse represented by the lack of approvals to date for an exploitation permit for the El Dorado mine in the department of Cabañas, in the north of El Salvador. This announcement represents a direct attack against the sovereignty and legitimate right of the Salvadoran population to reject an industry that is a threat to our lives.

The National Roundtable Against Metallic Mining condemns attempted murder against leader of the anti-mining movement in El Salvador.

The member organizations of the National Roundtable Against Metallic Mining, denounce the attempted murder against Mr. Alejandro Guevara Velasco from La Maraña Environmental Association in the department of Cabañas. We would like to express our deepest solidarity with Mr. Guevara and our strongest condemnation at the continued persecution that our members endure in El Salvador.

Given the socio-environmental crisis in the country, we demand the Legislature discuss and approve the proposed Special Law to Ban Metallic Mining

In 2006, we presented to the Legislative Assembly a proposed ban on metallic mining that, to date, has not being discussed by the Committee on Environment and Climate Change.   On the other hand, political parties such as former Party of National Conciliation, PCN, and business sectors as the Salvadoran Industrial Association, ASI, have lobbied for mining operations to be allowed back in the country. Although contamination resulting from heavy metals has been documented and targeted murders, in 2009, of opponents of the mining industry have occurred, the real debate about the implications of mining has been silenced in El Salvador.

The commitments made by ex President Antonio Saca, in 2008, and current President Mauricio Funes, in 2009, to stop mining projects are yet to materialize in a permanent mining ban. In the meantime, mining companies continue to sue our country in international corporate courts, demanding hundreds of millions of dollars, and death threats against members of the anti-mining resistance persist. Mining conflicts have also deepened in the Central American region, while the indifference of our own government to protect us from contamination stemming from neighboring countries remains, 49 projects along our borders have the potential to pollute our water, land and food.

In 2006 the National Roundtable against Metallic Mining in El Salvador introduced a bill to regulate mining activity in the country. Among other things, the bill proposed a ban on exploration and exploitation of metallic mining and sought to replace the Mining Promotion Act passed in 1995.

PRESS RELEASE:ICSID rejects request by Commerce Group to extend trial against El Salvador due to failure to pay

Given its failure to pay its fees to ICSID, the tribunal rejected the extension request by the mining company Commerce Group in the trial against El Salvador

On August 9th the International Centre for Settlement of Investment Disputes (ICSID) denied an extension request by the mining company Commerce Group Corp to continue its suit against the Salvadoran government. The ruling announced through its website makes reference to its finding that the company has not demonstrated that it has the financial resources to continue the process in this tribunal, which is part of the World Bank.  It is a ruling that we favor despite being based on the non-payment of fees by the company and not on the recognition of the dangers of pollution and destructive mining. A similar resolution on this case had already been announced by ICSID in 2012, so it is not a victory for the Salvadoran state in its defense of its sovereign right to deny mining permits to the company.

In October 2010, Commerce Group, a mining company of American origin, initiated a lawsuit for USD $100 million against the Salvadoran state when it revoked the operating license for the San Sebastian mine.  The mine is located in the province of La Union in the east of the country, where the mining company maintained operations intermittently for several decades of the last century. The permit was denied because of the pollution of the San Sebastian River and other irreversible ecosystem impacts. The San Sebastian River, located at the foot of the mine in the municipality of Santa Rosa de Lima, today suffers alarming levels of pollution from the mining of heavy metals by the same company.  Experts and national and international organizations, the Ministry of Environment and Natural Resources and the Human Rights Ombudsman, have denounced the contamination at the site and pointed out that the serious environmental degradation is affecting the rights to life, water, food, health and the environment of communities in the area.

Despite the disaster, Commerce Group has continued attempting to blackmail the Salvadoran state, making use of international corporate tribunals while not responding to the proven pollution impacts and without respecting the refusal of the people who prefer to preserve the few natural resources they have left.

As in the case of the demand for USD $315 million that the Canadian company Pacific Rim is bringing against the Salvadoran government, this is an extortion that demonstrates the enormous privileges that our policy makers have given to multinational corporations.

The Salvadoran state, in particular the institutions that must protect it, instead of celebrating victories that do not belong to them, and if indeed it is their intention to ensure our national sovereignty, should review and stop promoting investment agreements, such as the free trade agreement with the United States, the Association Agreement with the European Union, the Partnership for Growth and the law for Private Public Partnerships, that give privileges and maximum protection to the investment rights of transnational corporations to the detriment and expense of our sovereignty and human rights. In addition, if its mandate is to promote and defend the rights of the Salvadoran population, the government should urgently promote a law that bans metal mining given the enormous risks that it entails to the country.

Given the recent announcement by Goldcorp Inc. on the indefinite suspension of the Cerro Blanco mining project, the most advanced project in the border of El Salvador and Guatemala, the National Roundtable Against Metallic Mining states to the public opinion 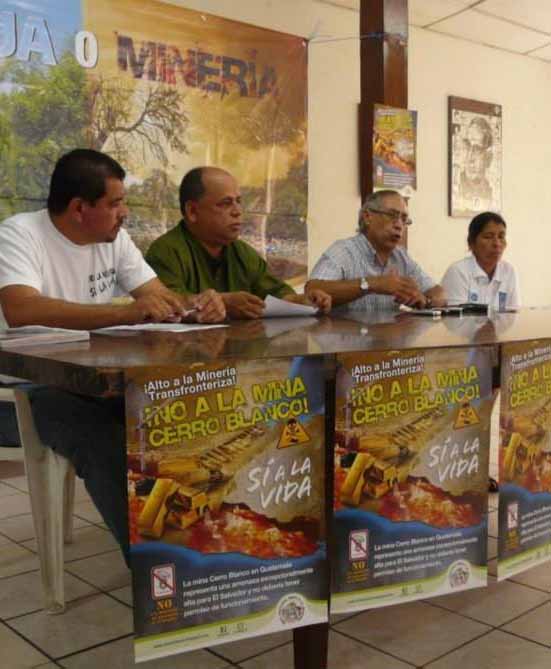 Last week, a Canadian mining company Goldcorp Inc., citing an unfavourable financial context for metal mining investment globally, announced the suspension of three mega projects, among them the emblematic Cerro Blanco project located in Guatemala, only 18 kilometres from the city of Metapan, in the western department of Santa Ana.

Unlike the financial issues cited by Goldcorp, we have denounced before that the technical information presented to the Guatemalan government to apply for exploration and exploitation permits was inaccurate and as such the project was unviable. The mine is located at Cerro Blanco geothermal reservoirs with temperatures above 80 degrees Celsius and to date this has been the main technical hurdle that the company has not been able to overcome and has resulted in higher costs than projected.