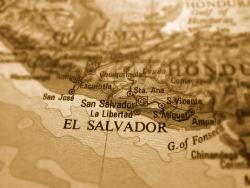 Despite pervasive poverty and unemployment in their tiny Central American nation of 6.9 million people, El Salvadorans are ignoring the siren songs of transnational mining companies that promise new jobs in mines billed as “environmentally safe.” The allure of gold and silver mining has been tarnished by the contaminated streams that are the legacy of mining in the country’s northern region. But broad popular opposition is now encountering provisions of the Central American Free Trade Agreement (CAFTA) that effectively elevate corporations over elected governments.

As I reported last November, the Milwaukee-based firm The Commerce Group is suing El Salvador for $100 million over the denial of a permit to re-open a goldmine that has caused extensive water pollution. Similarly, Pacific Rim, a Canadian corporation seeking to start an “open-pit” gold mine, has launched a $77 million claim against El Salvador. Under the terms of CAFTA, such legal disputes are settled by secretive international arbitration panels composed of corporate executives and government trade officials. In effect, they have the power to override laws protecting water quality, workers' rights and endangered species.

Read the rest of the article here…