Ten Violations that Should Prompt Its Removal 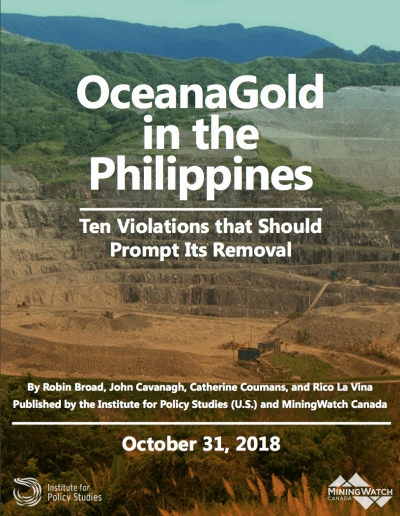 DOWNLOAD REPORT HEREOceanaGold Corporation (OceanaGold), an Australian-Canadian company, is one of dozens of transnational mining companies in the Philippines that have been reaping profits by mining gold, silver, copper, and other minerals. Its underground Didipio Gold and Copper Mine (Didipio mine) in the Northern Luzon province of Nueva Vizcaya started open-pit commercial production in 2013. It continues to operate despite a suspension order issued on February 14, 2017 by then-Philippine Secretary of Environment and Natural Resources (DENR), Gina Lopez. The agreement that allowed OceanaGold to start mining is a 25-year Financial and Technical Assistance Agreement (FTAA). The FTAA is set to expire in June 2019, but can be renewed by the Philippine government for another 25 years.

The authors of this report—researchers from the United States, Canada, and the Philippines— have studied OceanaGold’s operations in the Philippines and other countries. Among us, we have visited the Didipio mine on fact-finding missions four times since 2013. We have studied numerous reports and other fact-finding missions on OceanaGold’s record in the Philippines. We have carefully reviewed the multitude of complaints about the mine from the local community and provincial authorities dating back to when construction began.  This report lays out the results of our investigation, including our finding of numerous violations by OceanaGold of its FTAA and of national and provincial laws and decrees. The authors conclude that this mine has significant negative impacts on water, forests, land, indigenous peoples, human rights, biodiversity, and workers’ rights.

Hence, the authors support directly affected indigenous peoples and community members, as well as municipal, provincial and national stakeholders, who maintain that the FTAA should not be renewed and the mine should be closed. Given its track record, OceanaGold should also be considered ineligible for the additional exploration permits it has requested for areas around the Didipio mine.

Given these findings, the study recommends: