Looming threats to the mining prohibition in El Salvador 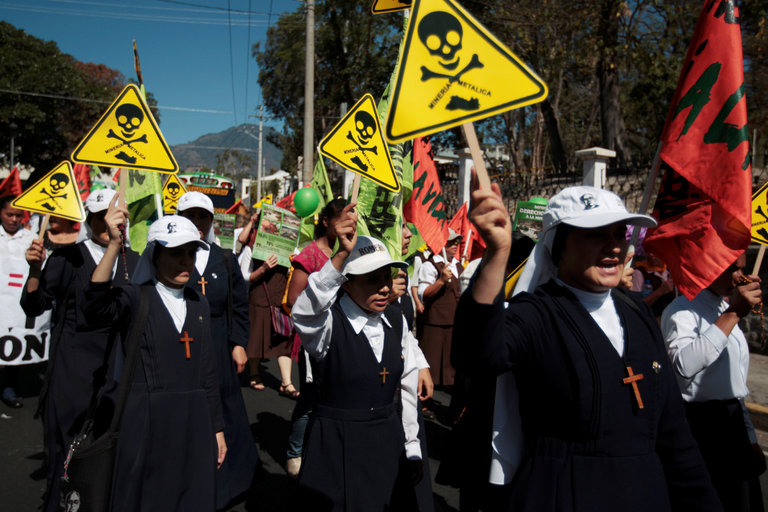 In March 2017, El Salvador became the first country in the world to ban metallic mining. But the huge victory of the antimining movement and the international recognition it has garnered may be overshadowed by a current electoral campaign that threatens to reverse the legislative balance of power in favor of the prohibition in the short term, and the executive government´s  in the mid-term.

At a recent event organized by the National Roundtable Against Mining to commemorate those who lost their lives in Cabañas during the struggle, leaders from communities that were most affected by mining projects said that some political battles are still pending to ensure the long-term sustainability of the mining prohibition. “First we need to ensure that the Attorney General’s office investigate the intellectual authors of the murders of environmental defenders who were assassinated in 2009, second we need to ensure that Minerales Torogoz, and the El Dorado Foundation leave Cabañas, and third we need our government institutions to generate sustainable economic activities in the region so those toxic companies never come back” Said Domingo Miranda, president of the La Maraña Environmental Association.

A loosely regulated mining program was introduced in the early 2000s in the northern region of the country where the government had identified 33 mining sites and granted 28 exploration concessions to about 10 different foreign companies based mainly in Canada, the United States and Australia. The mining program was a part of wider economic development strategy, concocted in the board rooms of the World Bank, which also included the construction of 12 hydroelectric dams, and a highway across the mountainous region of the country to connect the economic activity resulting from these mega projects.

But the development of the mining program quickly stalled due to fierce opposition from local communities who prevented mining explorations to begin in the departments of Cabañas and Chalatenango. By 2005, local organizations began to demand a national metal mining prohibition, that all existing exploration licenses were rescinded, and that contamination left by already existing mining projects be remediated.

The call from local organizations was quickly echoed at the national level where a consensus was formed that metallic mining is not a viable industry for the country due its precarious ecological balance.  A particular environmental condition that fueled the opposition to mining is the critical state of El Salvador’s water resources. More than 90% of surface water sources are contaminated, according to the Ministry of the Environment, and many studies suggest that El Salvador could be facing water shortages in the near future if no measures are taken to prevent further damage.

With this in mind the “anti-mining movement conducted its successful opposition to mining as the defense of water for the defense of life” Said Vidalina Morales from the Association for the development of El Salvador, ADES.

But mining companies did not take the opposition lightly.  When the intention to implement a moratorium to further study the impacts of mining was introduced in 2008, two companies sued the government of El Salvador: US based Commerce Group for $100 million and Pacific Rim Mining (later OceanaGold) sued for $301 million US at a World-Bank housed tribunal, the International Centre for Settlement of Investment Disputes (ICSID). Both cases were defeated by the Government´s legal team with support from allies in the international community.

Pacific Rim also engaged in high level lobbying of national authorities to try to have an exploitation license approved. At the local level in Cabañas, the company led a disastrous community relations campaign that engendered deadly conflict in the communities surrounding its El Dorado mining project.

Divided loyalties generated tensions and by 2007 environmental defenders began to report anonymous death threats against their lives and the lives of their relatives.  Violence escalated in June 2009 when community leader and vocal anti-mining activist Marcelo Rivera went missing in the town of San Isidro. His body was found two weeks later, rotting inside a water well, with signs of torture reminiscent from the executions carried out by death squads during the civil war in El Salvador.  By 2011 three more antimining activists had been murdered: Ramiro Rivera, Dora Alicia Sorto and her unborn child, and Francisco Duran.

After convicting paid gang members who were accused of committing the murders, a full investigation into the intellectual authors of these murders was never conducted by Attorney General´s office.  Miguel Rivera, brother of murdered leader Marcelo Rivera, faults the corrupt justice system in El Salvador for the lack of a deeper inquiry.  “Rodrigo Chavez, Vice President of Pacific Rim El Salvador while the murders took place, was jailed for killing and dismembering a municipal employee, but despite the circumstantial evidence against him, he was never investigated as a possible intellectual author of the crimes in Cabañas.”  he stated.

Chavez is the son of a well-known politician who once was the Minister of External Affairs of El Salvador. He was convicted to ten years in prison for committing a gruesome murder linked to narco activities. Yet, he was afforded all the clemencies of the legal system, only two years after he was convicted to a ten years prison sentence, he was granted an early release by a judge.

But the search for justice, closing existing mining operations and the implementation of sustainable economic alternatives after the mining prohibition may soon change as the main priorities of the antimining movement. After nine years in power, the FMLN, the party that has mildly supported a progressive environmental agenda, has suffered significant erosion of public support while the pro-business ARENA party, which introduced the mining program in 2002, is poised to take a significant majority at the legislative assembly in the upcoming March 4th elections.Even more frightening is the upcoming presidential election in 2019, ARENA’s favoured candidate, Carlos Callejas, is known to have close ties to Canadian mining magnate Frank Giustra.

OcenaGold lost its law suit against El Salvador in October 2016, but there is reason why the company has not completely closed its subsiadiaries Minerales Torogoz and El Dorado Foundation:i f the right consolidates its power at the legislative and executive levels, chances are that the current prohibition will only be a temporary measure.