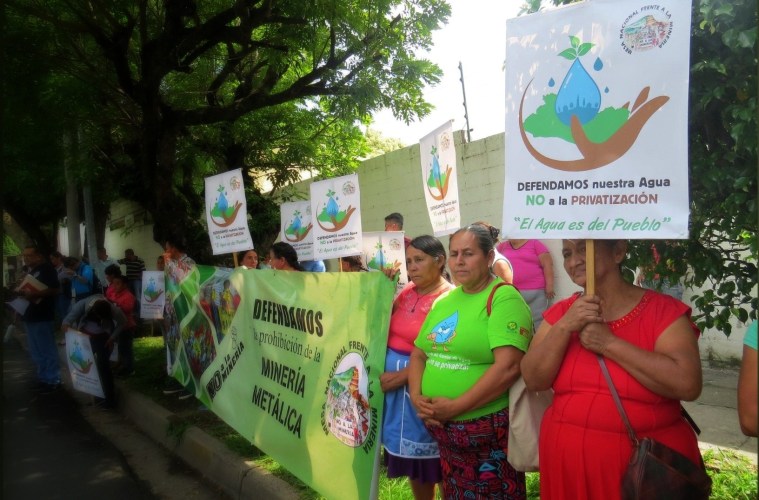 The Law that prohibits mining in El Salvador was approved more than two years ago. Along with the law, key measures that needed to be implemented, such as the technical closures of the abandoned mines and remediation measures for environmental damage, remain absent. The government of the FMLN (Farabundo Martí National Liberation Front) had two years to enact these measures and it failed to do so. As such, the Roundtable against Metal Mining has asked the new government of Nayib Bukele to resume the actions still pending from the approval of the Metallic Mining Ban.

According to the Ministry of Economy, fifteen mining projects have ceased to be active in El Salvador, but since March 2017, date of the approval of the Metallic Mining Prohibition Act by the Legislative Assembly, the closure procedures for the mines have not initiated. Consequently, acid drainage (a toxic mix resulting form the gold extraction process) still spills and contaminates rivers as explained by the members of the National Roundtable against Metallic Mining in El Salvador.

The representatives of the roundtable in El Salvador, arrived at the facilities of the Ministry of Environment and Natural Resources (MARN) this July 24th, to request that the new government implement the necessary actions to guarantee the definitive closure of the mines, compensate the environmental damages and offer alternative employment options to people in communities that are still engaged in artisanal mining activities (known as guiriceros). Even though the FMLN government had two years to implement this measure, action is still left pending.

The National Roundtable against Metallic Mining also asked the Minister of the Environment and Natural Resources, Fernando López, to respect the commitment to close the 15 mining projects, contemplated in a report prepared by the Ministry of Economy (MINEC) entitled: "Inventory and diagnosis of 15 ancient mining works". In the report, these projects were classified as "mining liabilities".

These mining liabilities, according to representatives of the Roundtable, are located in several municipalities of three departments of El Salvador: Morazán, La Unión and San Miguel. The San Sebastián mine which is located in Santa Rosa de Lima, La Unión, as the representatives of the roundtable explained, continues to pollute the waters of the local San Sebastian river. As a result, the health risks for communities near the river stream increase.

Rodolfo Calles, a member of the roundtable against mining, pointed out that the new government must begin the processes of environmental remediation of the damages caused by mining companies in the country. The representative also urged the Ministry of Economy (MINEC) to train artisanal miners in order to move to sustainable productive activities instead of mining.

Vidalina Morales, president of the Association of Social Economic Development Santa Marta (ADES), assured GatoEncerrado that some mining projects are still latent in El Salvador. Moreover, according to the environmentalist Morales the authorities of the MARN must explain the legal situation of OceanaGold mining company in the department of Cabañas.

The Anti-Mining Law established that the Guiriceros had two years to abandon artisanal mining in order to transition to occupation, naturally with the help of the State. However, this transition was started by the FMLN government and it still constitutes an urgent matter to be addressed by the new government, the two-year transition period expired in April this year.

According to the members of the roundtable, the new government should assign a budget to reinforce the institutions and ministries responsible implementation of the mining ban and the "environmental remediation plan".

Fear of a reversal

The members of the National Roundtable against Metallic Mining also expressed the fear that the mining law will be reversed in the country. The representatives stated that the streamlining and flexibility of environmental permits, which is one of the main bets of Minister López, should be analyzed "with a magnifying glass."

The minister informed President Nayib Bukele that he has already begun with the streamlining of environmental permits, which amount to $1,415 million in private investment.

Rodolfo Calles, stated that environmental permitting practices should be studied comprehensively, in order not to grant permits to projects that are harmful to the environment.

“Not every project will generate development, and if it generates it, it is going to be for the benefit of a small group. If they are going to approve permits, they must enjoy environmental feasibility and not only because they are going to generate revenue to the country” stated Calles.

The National Roundtable against Metallic Mining also urged the government and the new minister to take action within the Legislative Assembly to give the The Metallic Mining Prohibition Law constitutional status.