"The prosecutor congratulates the people of the municipality of Cinquera for their active participation" in the popular consultation and "especially for deciding and promoting the defense of life and the environment," said a statement by the Office of the Attorney General for the Defense of Human Rights (PDDH).

On February 6th, the Catholic Church presented the Legislative Assembly a legislative proposal to prohibit metal mining in El Salvador.

Next Thursday, March 9th, the Catholic Church will carry out a march to demand that the representatives of the Legislative Assembly approve the Law to Ban Metal Mining in El Salvador.

The march will leave at 9:00AM from Bolivar Park and will lead to the Legislative Assembly, when they will also hand to the representatives the signatures that have been collected to prohibit any type of metal mining operation in Salvadoran territory.

On February 28th, Amanda Grzyb,  associate professor of Information and Media Studies at Canada’s Western University gave a talk as part of an ongoing public interest lecture series, bringing the anti-mining struggle of El Salvador to the Canadian north with an informative presentation. 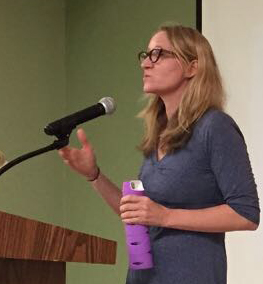 In a local library, a crowd gathered to learn about the environmental crisis in El Salvador and Salvadoran efforts to protect precious water resources from transnational mining companies. Having just returned from overseeing an international delegation in El Salvador herself, Grzyb was able to show her audience video footage of Salvadoran community leaders speaking about their ongoing struggles. Bringing the words of community leaders directly to a Canadian audience proved a powerful experience for those watching, and a passionate discussion followed the presentation. The audience was composed of a diverse group of students, professors, and many members of the local community. Also present at the talk were several members of the international delegation that had observed a referendum on mining in the community of Cinquera the previous week, as well as the Director of SalvAide, Alfredo Marroquin.

Another Town in El Salvador Votes No to Mining “Mining companies have a wide field with major extension in other countries, and often they need to use the comparative law of other countries to be able to apply their practices here in El Salvador. But the truth is that El Salvador is a country so small that industrial mining is not viable,”Attorney for the Defense of Human Rights, William Iraheta told IPS.

El Salvador is the smallest country in Central America, but also has the highest population density, with 300 people per square kilometer. It is also he fourth most vulnerable country to climate change according to GermanWatch, with 95% of the population living in a high-risk zone. READ MORE